Marveling over the Macabre

The Monkey is feeling the author-love today… 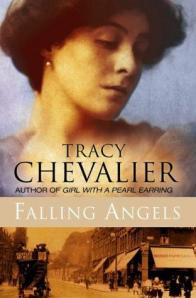 …second of all, as I sit cradling my copies of Her Fearful Symmetry and Falling Angels freshly signed by their respective authors,

Audrey Niffenegger and Tracy Chevalier!!  Imagine my delight during a dull workday afternoon when I received the phone call that my wait-listed arse had scored a last-minute opening for last night’s lecture.  Located in the 19th-century chapel of London’s Highgate Cemetery, the event began with a cocktail-half-hour of wine and milling about the gateway to Highgate’s West Cemetery (where poet Christina Rossetti and her brother, Pre-Raphaelite painter Dante Gabriel Rossetti are buried, among other notable deceased–Karl Marx is buried in the East counterpart).  Filing into the intimate confines of the chapel, we were treated to readings from each author’s novel as well as explanations as to how they came to chance upon Highgate Cemetery and become inspired to build their literary projects around its historic, overgrown, and elegantly morose splendor.

Both American women had merely visited as tourists that first time, but the impression upon both was immediate, and they subsequently became volunteer tour guides as a means of interacting with this enchanting garden of flora and headstones as well as unearthing more of its history than any texts could reveal (Niffenegger continues to conduct tours here, and Chevalier lives just down the hill from the site).  Following their brief “lectures” (which were structured as interviews between the two authors themselves), the floor was opened to a Q&A session with the audience.

Chevalier had originally written a manuscript divided between modern-day and a period backdrop, yet ultimately felt the graveyard and its history lent itself best to historical fiction, so her novel, Falling Angels, takes place during Edwardian England.  She was most interested in how this once pristinely trimmed and pruned site came to fall into such decay and neglect following the Victorian Era, yet wanted to capture the local culture prior to the changes wrought by World War I, when many had lost their faith in God.  The tale depicts two feuding families that ironically share neighboring burial plots in Highgate Cemetery.

Niffenegger had likewise begun her novel along a different path than the one ultimately taken, centering on a different character and a different graveyard (Chicago’s Graceland Cemetery—woo-hoo to my sweet home, Chicago!).  She had realized that if a cemetery was to play such an integral role in her book, she would need to ensure that it was one of the ultimate ones.  Just like Chevalier had visited the cemetery several years before actually writing about it, Niffenegger cited memories of a 1990s visit to Highgate Cemetery during which she spent half the time looking at it through a camera lens and fiddling with said contraption (her words to the wise are to visit the cemetery without your camera on your first visit, which I gratefully did just two weeks ago…I wrestle with the ethics of graveyard photo-opping anyway).  She, however, essentially said her mind does not wrap around historical fiction naturally, so she maintained her novel, Her Fearful Symmetry, during the present day and incorporates an American element, given that her two main characters are American twins who come to inherit their aunt’s London flat that overlooks the cemetery.

I was captivated by everything each woman said in its entirety, yet my pea-brain is unable to reproduce an accurate transcript of everything wonderful and insightful about it.  A couple other comments that do linger in my mind, though, were their reflections on after a novel is written.  Chevalier said that she continues to “collect” ideas from the places that inspire her, whereas Audrey felt that her characters and their story lines eventually go “quiet” in her mind, and thus she moves on.

I wonder which will ultimately happen to me…Ironically, I found great inspiration to write at another Victorian cemetery just a block from my flat and which I’ve been visiting ever since the day after I moved here two years ago, so I had more affinity for this particular lecture than merely the fact that I did love reading the authors’ other books, The Time Traveler’s Wife and Girl With a Pearl Earring.  And, like Niffenegger, I do sense my protagonist’s voice and immediacy fading from my consciousness lately, which signals to me that it’s time to bring her story to rest.  May it requiescat in pace for her, then, yet stay alive in my imagination and those who will humor me and read it some day 🙂

*** For more coverage of this event, please do also see author/illustrator Sarah McIntyre‘s blog post, “audrey niffenegger & tracy chevalier at highgate cemetery” —this is a comprehensive trove of observations, sketches, photos, and video! ***

Primate that dapples in writing when not picking others' fleas or flinging its own poop. END_OF_DOCUMENT_TOKEN_TO_BE_REPLACED
This entry was posted on Thursday, May 27th, 2010 at 20:25 and tagged with Audrey Niffenegger, book signing, Falling Angels, Girl With a Pearl Earring, Her Fearful Symmetry, Highgate Cemetery, Room to Write, The Knot, The Time Traveler's Wife, Tracy Chevalier, World's Strongest Librarian and posted in Musings on Writing, Novel, Setting. You can follow any responses to this entry through the RSS 2.0 feed.
« Remote Control
Slippery When Wet »

13 responses to “Marveling over the Macabre”