A Cage of One’s Own 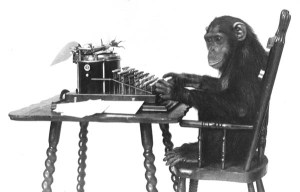 Ya know, I usually play up the whole monkey thing because I think I’m so terribly clever and no one will ever get sick of it (shyeah right, you’re thinking), but, honestly, my flat really is starting to feel like a zoo right now.

Within one week of returning from two weeks in Singapore with my husband and in-laws, I already hosted two separate visitors and received news that another was scheduled to arrive, well, as of yesterday and staying for two weeks. Apparently so much poop flies around in here that my husband’s ears must’ve gotten clogged, because for the second time we have a scheduling conflict thanks to our stellar communication with each other. The first time was last fall when we double-booked my parents and a couple friends of ours—six adults in a wee flat of one bathroom + two beds + one punctured aerobed screamed nightmare to me, so I took my parents to the Cotswolds for most of the overlap while my husband hosted our friends. Problem solved.

Well, it turns out that I’m fleeing to the countryside yet again during my father-in-law’s present visit. Something about telling my husband, “If your father hasn’t decided on his dates yet, late August is out because I’m going on a writer’s retreat in the wake of our insane spring and summer,” got lost in translation, so he’d emailed his dad that late August still worked great. Great.

So here he is, and here I am packing up to leave on Sunday for five nights in Cornwall.

Could I have canceled? Sure.
Was there a chance in hell I was going to? No sir.
Do I feel a little bad about that? Of course!

But maybe this is a good time to mention that we’ve hosted over thirty (30) different people in less than three years since moving to London. And hosting is particularly problematic for those like me who work from home. And whose office is also the guest bedroom. In all fairness, though, this guest is super easy and independent, and we’ve given him the master bedroom so I can access my computer.

Nonetheless, after doing a little more basic math for this year alone, I estimate 30% of 2011 will have been spent hosting, traveling, and visiting home. Which leaves a lot of everyday life to be crammed into that remaining 70%. Which leaves not a lot of time for a reclusive writing life. (And I don’t even have kids!! How do you writers with children do it all??!!)

So I’m going, to a cage aaall to myself. No work, no hosting, undoubtedly a little hiking, but primarily writing. Selfishness has never tasted so delicious. See you in a week or so.

And how about you? How have you made a point to prioritize your writing, to give yourself some space to think, imagine, and create?

Primate that dapples in writing when not picking others' fleas or flinging its own poop. END_OF_DOCUMENT_TOKEN_TO_BE_REPLACED
This entry was posted on Friday, August 26th, 2011 at 12:00 and tagged with blogging about writing, Cornwall, creative writing blog, editing a novel manuscript, getting a novel published, revising a manuscript, revising a novel first draft, writing discipline, writing fiction and posted in Monkey Miscellany. You can follow any responses to this entry through the RSS 2.0 feed.
« Oh, Okay Fine. May as Well.
From Graphic Leftovers to Graphic Tees »