“And without much ado 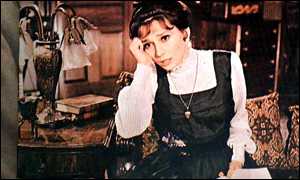 we can all muddle through
without you.”
– My Fair Lady

‘Tis the season of literary shenanigans, it seems. So soon in the wake of the Writing Festival in York came the London Book Fair this week. It was right in my neighborhood (practically “On the Street Where [I] Live,” so I figured it wouldn’t hurt to pop in, although I didn’t find the lengthy list of sessions to really offer much to writers themselves—more of an industry thing that didn’t leave me feeling “I Could Have Danced All Night” riding a book-high. What I definitely took away from it, though, is that traditional publishers are shakin’ in their boots a bit at the digital revolution occurring, that growing options for self-publishing are eliminating the gatekeepers of the industry, and that marketing your book requires the same amount of legwork on your end whether you’re traditionally or self-published. Contrary to popular belief, traditional publishers don’t guarantee you “discoverability” and may not allocate much money toward your marketing. So establishing your own fan-base via social media well in advance of your book’s submission/publication is key, as is making the effort to put yourself out in the community for book signings, speaking events, etc. afterwards.

The quotation yesterday that made me *gulp* at what I surely already knew:

“Writing is a passion. Publishing is a business.”

Meh. Nothing new, but it in a nutshell reminded me of the aspect I’ve disliked so much about this process so far. The best part was when I was just writing. But researching for submissions and revising in light of rejections and being overall totally lame where networking and self-promotion are concerned do kill the spirit a little… And yet it’s also rather exciting, isn’t it? I’ve always needed a challenge, and facing one that seems practically insurmountable is quite the motivator and defeater all at the same time.

The talk of self-publishing and e-books, though, I find heartening, and here’s my thoughts on it these days. It’s by no means a last resort—it’s getting your work out there for others to read, which is the point of wanting to get published, isn’t it? Yeah, it costs upfront for printing, cover design, and editorial services (money will always be a damn gatekeeper). But, barring that factor and looking at it just conceptually for a moment, if you have to market the crap out of yourself anyway, why not get a faster start at that to grow readers sooner? It’s not like you still can’t query an agent or publisher with that same manuscript afterwards. You still own the rights to it, no matter what, and you’ll have a nicer format and (hopefully) readers/reviewers by then to vouch for its content. I don’t know… What was sad and somehow so cute at once was that an older gentleman I’d met yesterday explained that he wants to self-publish because he doesn’t think he has enough time left to wait out the years traditional publishing could take. Aw 😦

It leaves me thinking that after I finish my current round of revision, I’ll do a massive query blast (my December/January queries were just dipping my toe into the waters), and if I don’t hear anything in the affirmative as the months roll by, self-publishing is the attractive option from there—even despite the stigma hovering over it. There are so many ill-edited indie books being put out there (simply because any schmo can), so it’s almost an obligation for diligent writers to get theirs in that market, too, and dilute the stereotype. I’ll stop spending money on freaking workshops and allocate it toward a professional editing service, then maybe start with an e-book until I can justify the funds for a print version. And then, I query-blast again! My publisher search would remain ongoing. So that’s a game-plan I’m at the beginnings of formulating in my head, anyway… Time (and funds) will tell.

“Wouldn’t it be Loverly,” though, to go that route and say, “Just You Wait,” publishers, I can do this “Without You“!

So what are your thoughts on self-publishing (digital and/or print) versus traditional publishing? Is the former an option you’ve seriously thought about? Why or why not?