No “Hem”-ing and Hawing About It: Hemingway Speaks in “Ernest” – Part III 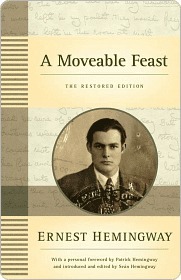 Right. So, I don’t know about you, but I didn’t live up to my end of the bargain at the end of my previous post. I haven’t completed any creative writing since then, but I did get through another round of edits on someone else’s super-fun paranormal romance and am taking on some additional freelance work writing/editing commercial documents and web content for a couple small businesses. Hey, it pays the bills. I do find myself in a peaceful sort of limbo today, though, that should allow me a chance to crack open manuscript #2 and crank on its final chapters. But first things first: in getting psyched and inspired to write by those who’ve already done it so well, it’s time to wrap up my little literary miniseries here with some final quotations from Ernest Hemingway’s A Moveable Feast.

He liked the works of his friends, which is beautiful as loyalty but can be disastrous as judgment.
~ from “Ezra Pound and the Measuring Worm”

We still went under the system, then, that praise to the face was open disgrace.
~ from “Scott Fitzgerald”

That fall of 1925 [Scott Fitzgerald] was upset because I would not show him the manuscript of the first draft of The Sun Also Rises. I explained to him that it would mean nothing until I had gone over it and rewritten it and that I did not want to discuss it or show it to anyone first.
~ from “Hawks Do Not Share”

Every writer is different, but hopefully we all understand the value of actively soliciting constructive criticism of our work. That said, I totally share the reluctance Hemingway had when it comes to handing over an early draft, the desire to give yourself the opportunity to critique it first before letting other eyes judge what is surely not yet your best. There does come the time, though, to fork it over, and I’m still steeling myself for this step…I do know a select few friends whose loyalty wouldn’t impair their judgment; they would tell it to me straight without fear of hurting my feelings, which is fortunate and terrifying all at once as I endeavor to shape what I do into something truly good by any measure…but what defines good writing?

[Fitzgerald’s] talent was as natural as the pattern that was made by the dust on a butterfly’s wings. At one time he understood it no more than the butterfly did and he did not know when it was brushed or marred. Later he became conscious of his damaged wings and of their construction and he learned to think. He was flying again and I was lucky to meet him just after a good time in his writing if not a good one in his life.
~ from “Scott Fitzgerald”

He spoke slightingly but without bitterness of everything he had written, and I knew his new book must be very good for him to speak, without bitterness, of the faults of past books. He wanted me to read the new book, The Great Gatsby, as soon as he could get his last and only copy back from someone he had loaned it to. To hear him talk of it, you would never know how very good it was, except that he had the shyness about it that all non-conceited writers have when they have done something very fine, and I hoped he would get the book quickly so that I might read it.
~ from “Scott Fitzgerald”

When you first start writing stories in the first person, if the stories are made so real that people believe them, the people reading them nearly always think the stories really happened to you. […] If you do this successfully enough, you make the person who is reading them believe that the things happened to him too. If you can do this you are beginning to get what you are trying for, which is to make something that will become a part of the reader’s experience and a part of his memory. There must be things that he did not notice when he read the story or the novel which, without his knowing it, enter into his memory and experience so that they are a part of his life. This is not easy to do.
~ from “On Writing in the First Person”

Then I started to think in Lipp’s about when I had first been able to write a story after losing everything. […] It was a very simple story called “Out of Season” and I had omitted the real end of it which was that the old man hanged himself. This was omitted on my new theory that you could omit anything if you knew that you omitted and the omitted part would strengthen the story and make people feel something more than they understood. […] And as long as they do not understand it you are ahead of them. Oh sure, I thought, I’m so far ahead of them now that I can’t afford to eat regularly. It would not be bad if they caught up a little.
~ from “Hunger was Good Discipline”

I feel the strong need to emoticon that last one, but will do it here so it doesn’t look like Hemingway stooped to my level. Here it is: 🙂 I think that observation speaks (to an extent) to the debate in my first post in this series about writing to the market…I think sometimes you do have to throw the reader a bone and hand-hold just a little if you want them running along with you and cheering you on—rather than giving up on you because you’re trying to be a profound and abstract literary genius, sitting up there on-high in your little turret all alone but for the company of a story only you could love. 🙂 (There, I emoticoned again! It’s a modern disease!) But to continue…

In writing there are many secrets too. Nothing is ever lost no matter how it seems at the time and what is left out will always show and make the strength of what is left in. Some say that in writing you can never possess anything until you have given it away or, if you are in a hurry, you may have to throw it away. […] They say other things too but do not pay them too much attention. They are the secrets that we have that are made by alchemy and much is written about them by people who do not know the secrets or the alchemy. There are many more explainers now than there are good writers. You need much luck in addition to all other things and you do not always have it. This is regrettable but nothing to complain about as you should not complain of those explainers who tell you how you do it and why, if you do not agree with them. […] Good writing does not destroy easily…
~ from “Nada y Pues Nada”

I must say, I’m touched by Fitzgerald’s humility regarding The Great Gatsby, as well as the esteem he was held in by his contemporary Hemingway (even when other aspects of Fitzgerald’s life hardly impressed him). What a fascinating time to be a writer back then, when there was still uncharted territory—hell, when there was still un-agented submissions!—and classic American literature was given new voice. So many pioneering and influential artists, right there in Paris at the same time and toasting cocktails to one another…no wonder Woody Allen wanted to pay homage with his recent film Midnight in Paris. An era idealized in nostalgia? Sure. But there’s no questioning the contribution that those people at that time made to what so many of us continue to aspire to today; it was a recipe for greatness whether they knew it themselves yet or not…a wonderful alchemy of talent and ambition that not even the explainers can explain.

“Hem, you won’t forget about the writing?”

I went out to the telephone. No, I thought. I would not forget about the writing. That was what I was born to do and had done and would do again. Anything they said about them, the novels or the stories or about who wrote them was all right by me.

Primate that dapples in writing when not picking others' fleas or flinging its own poop. END_OF_DOCUMENT_TOKEN_TO_BE_REPLACED
This entry was posted on Wednesday, May 23rd, 2012 at 15:12 and tagged with A Moveable Feast, blogging about writing, creative writing blog, Ernest Hemingway, peer critique, reading to write, writing a novel, writing blog, writing fiction, writing guidance, writing tips and posted in Memoir, Musings on Writing. You can follow any responses to this entry through the RSS 2.0 feed.
« No “Hem”-ing and Hawing About It: Hemingway Speaks in “Ernest” – Part II
Ahhh…Thanks. I Needed That. »

2 responses to “No “Hem”-ing and Hawing About It: Hemingway Speaks in “Ernest” – Part III”