Swingin’ Over to the RBU Tree

For what, pray tell, could this poor little panda have been incarcerated?

The Monkey likes to stretch its limbs in other cyber-trees sometimes, so you could formerly read my guest post over at Real Bloggers United (“RBU”) for all the sordid details of this particular case. RBU was once a lovely forum of diverse bloggers who devote quality time and writing to their blogs and readers—it wasn’t about ads and revenue but collaborating toward blogging with substance.  I was proud to be a part of this initiative while it lasted, but alas, all good things come to an end, so now I’m reposting my RBU contribution here.

Every month, RBU’s guest bloggers followed a specific theme, and this May was “Treasures.” 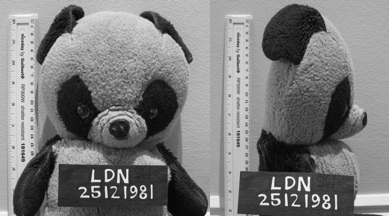 Confession: I am a sentimental schmuck by nature.
Exhibit A: Bag of wallpaper shavings that has resided in my parents’ garage for well over two decades.
Motive: My change-fearing child-self cried so hard when my mom hung new wallpaper in our kitchen.
Defense Plea:
I do not recall how old I was at that time, but I assert that I was too young to know better. And if that defense is ineffectual, I’d like to call in a medical witness who can diagnose me with terminal sentimentality, as I continue to be prone to such attacks to this day (it’s genetic—my parents will testify on my behalf if subpoenaed). Regardless, I did not act alone. I believe that hanging from my arm at the scene of the crime were undoubtedly one of the two usual suspects.

Profile:
The intent was to call her “Lamby,” but for some unknown reason I would not pronounce the “L” sound at the age of three. Once, my grandma attempted speech therapy in trying to get me to repeat after her, “Luh-Luh-Lamby.” For every failed attempt, I responded, “Luh-Luh-Yammy.”

Another time I overheard my dad and older brothers yelling at a game on TV, “Go Miami!” I looked at them with brows furrowed territorially and insisted, “No, MY Yammy.” (My inner selfish bitch blossomed at an early age, as you can see, but that is irrelevant to the case and should be struck from the record.)

Yammy was a friend and confidante for two blissful years until Accomplice #2 arrived on the scene to usurp my affections.

Accomplice #2: Amanda the Panda
Alias: Mander (pronounced ‘mahn-der’)
Species: Panda Bear
Present Location: London, UK
Identifying Characteristics: Course, pebbly fur, matted down and hardened from decades of hugging. Scratched eye surface (resembles cataracts). Pronounced indentation around the waistline caused by wearing a doll’s skirt that was too small for six months. [Note: Amanda grew one inch taller on our family growth chart during the early 1980s due to compression of aforementioned hugging. Therefore, be advised that she may now appear even taller.]

Profile:
Amanda the Panda was a Christmas gift from my parents when I was five. She has an “official” birth certificate that I scribed by hand with a blue ballpoint pen on a sheet of notebook paper. The document can presently be found in my photo album archives in Chicago.

Two years ago, I transported Amanda over the Atlantic in my carry-on so she could reside with me in London. On the occasional night when I’m sunken into a mode of regression, I will fall asleep hugging her, much to my husband’s dismay when he ends up having to spoon us both. I have been known to still sniff the bear now and then to find the comfort of my own scent like I did as a kid.

Amanda has survived soakings, hangings, and kidnappings. There was one occasion when my father took her and me to a Teddy Bear clinic so her arm could be stitched and wrapped in gauze.

No injury was sustained during one said kidnapping, however. Indeed, my older siblings had only staged her murder when they shoved her in the microwave. After I ran away wailing to the sound of them setting the timer, they replaced her with a pile of black and white soil from a potted plant and brought me back to see what I believed were her charred ashes. No charges were pressed against the offenders; however, this is why Amanda has remained in my sole custody after all these years.

Closing Statement:
As much as I try not to rely on material objects for meaning, I think it is only natural that those of us who suffer from terminal sentimentality will assign immense intangible value to the tangible things we can physically carry with us as time fleets away. With their appeal to the visual and tactile senses, our personal treasures are perhaps the closest we will ever come to a time machine for the speed with which they transport us back to our cherished past and integrate it into our ongoing existence. Is it the fur, stuffing, and curling shards of wallpaper that bear intrinsic value for me? Of course not. But the value I attach to them could never be appraised nor ever depreciate, and for that reason, I hold on.

I rest my case.