If The Shoe Fits 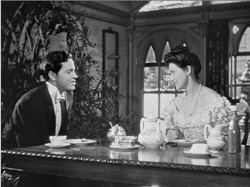 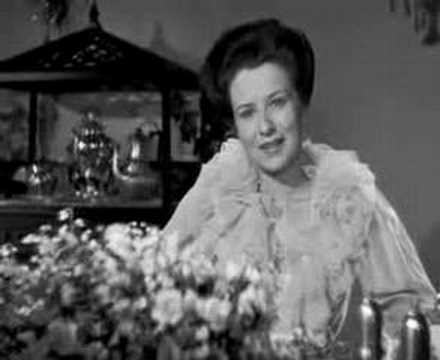 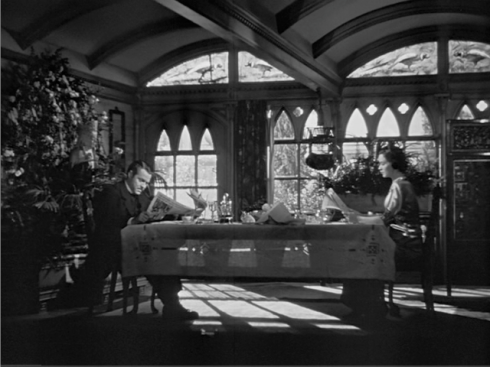 Ever see the movie Citizen Kane?  Well, there’s a montage relatively early in the film following the marriage of Charles Foster Kane.  The photos above do not capture the complete sequence (please click on any photo or here to view the full scene), but what we see from left to right is the progression of Charles and Emily’s marriage.  There are a few cinematic devices at work to show us in less than 3 minutes’ time that this couple gradually grows apart from one another emotionally:  mise-en-scene (setting/props), music, dialogue, acting (body language, tone, proximity), and costume.  To focus on this last element in particular, we see the neckline of Emily’s garments climb ever higher as the cut and fabric of her gowns likewise shed their romance to become increasingly structured and rigid.  In this way, what a person wears can speak volumes for who they are and how they feel at a given moment in time.

Page 35 of Room to Write asks us to write about clothes today.  We can “take a character shopping,” describe clothing we like, dislike, or has otherwise made a strong impression on us, or simply free-write beginning with the words “clothes” or “clothing.”

Oh goodie.  I’m going to take my character “Margaret” shopping, or at least raid her closet to determine what it says about her.

During Part I of her tale, I would take her shopping at a vintage shop for accessories as well as a contemporary store selling vintage-inspired clothing such as Anthropologie.  After that, it’s shoe-shopping!

– In the later half of Part I when she has temporarily moved, thus only packs what she would need for a few months:

“The separation from her stored goods had been achingly painful—her weakest moment being when she cradled a pair of claret suede leather stilletos before lovingly packing them away with assurances they would be okay, that Momma would be back, as though tucking children in bed and promising no monsters would prey on them in the night.”

– And though impractical, you can still at this point hear her “high heels echoing off the walls as they clacked on the wood and cobbles.”

Towards the end of Part I, however, we already see how a shift in Margaret’s lifestyle results in a shift of her wardrobe as well.  At this point, I’d probably still be taking her to vintage shops, but, instead of jewelry, it would be for clothing more in the vein of Urban Outfitters.  These shopping excursions would be infrequent, though…probably just the one time.

– Getting pensive in the shower one morning, she finds herself wondering:

“What if she fell out of the habit of nine-to-five, of suiting up in business casual and charging at the world in proactive high-heeled fury?  She had been gravitating quite naturally to the irregularity of her schedule and informality of denim and limp old cardigans thrown over graphic tees, of every-other-day unwashed hair thrown into a man’s tweed cap.”

– Though she doesn’t wear jewelry anymore, she still accessorizes her t-shirts with linen scarves (that’s an effort, anyway), yet after she compliments her friend’s appearance and doesn’t receive one in return, she “shuffle[s] one now glaringly plain denim leg over the other.”

– We frequently see her in “her cardigan—that worn, pilled one of charcoal grey that had been her uniform for some time.”

– When our dear protagonist eventually seeks counseling for an issue you’ll better understand when you read the book ;), we do see a brief return to her previous style at the first two sessions:

“Margaret sat up and, knocking over one of her classic black pumps (she’d made a decided effort to dress up to par for this professional appointment, and had only removed the shoes to protect the couch cushions), reached for her handbag.”

“Margaret self-consciously fingered the vertical ruffles and cloth-covered buttons that extended to just below her chin.  Her cap sleeves were trimmed in a dainty band of lace.”

In doing this, she admits to her psychologist:  “It’s like I’m acting the role of myself…I’d forgotten, though, how much faking enthusiasm can actually generate the real thing.  It’s like if I make myself smile long enough, I can convince myself I’m happy.”

– By the third session, however:

“Margaret whimpered as she picked at the pills on her grey cardigan.”

“She tapped her Converse All-Stars around with her striped cotton toes.”

Aside from that, Margaret really only window-browses now when we go shopping.  She’s got her comfortable, casual staples and has no qualms repeating their wear often.  This isn’t to say, though, that she doesn’t still know how to turn up the Attractive Factor in her new lower-maintenance way:

– “Before he had left, however, she did not catch directly at his sleeve just as he opened the unit door so much as produce an identical effect by the way she stood at her bedroom doorway in just an over-sized t-shirt.”

Now that I’m almost finished with Margaret’s story line, I can look back and reflect that I’ve certainly been making deliberate clothing choices for her to mirror her life stages and emotional states.  However, I don’t describe much more than what I have above, as I personally feel that too much physical description of a character makes me as a reader too conscious of the writer behind the story, and it inhibits my own imagination.  I want my readers to be able to flesh out characters with their own brushtrokes, guided only by occasional suggestion. Hopefully, the descriptions that are there seem appropriate and are not too cliche for what they represent.

What do you think about characterizing through clothing?  What does it reveal or conceal?  Are appearances always as they “seam”? (pun fully intended—you ought to know how corny I am by now)