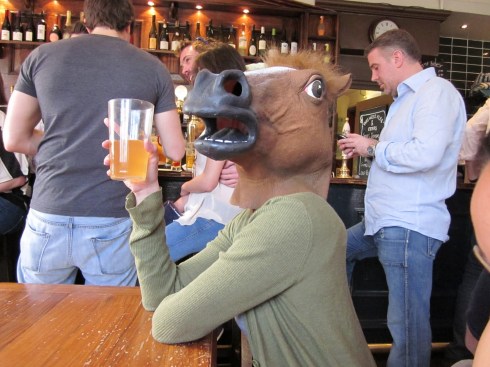 Playing the "Time Lord" is no matter to horse around with.

After surely leaving you in suspense all week with the dramatic hook at the end of my last post, “Pacing Your Pages – Part I,” I bring you the thrilling conclusion of the joke:

A horse walks into a bar, and the bartender says…

“WHY THE LONG FACE?”

Right. To get back on topic, last time I introduced the first part of author Julie Cohen‘s workshop on Pacing. She’d explained how we’re the “Time Lords” over our readers’ experience with our novel—how engaged they are and how quickly they move through it. We’ve already been over analyzing our use of conflicts, functions, hooks, and variety, so moving onward today…

Keeping secrets is another tool for creating a page-turning novel. As Cohen said:

As the writer, we can choose to either keep a secret from the reader or let them in on one that’s kept from a character. However you approach it, try to keep that secret for as long as you can, as wanting to find out what it is (or see the character do so) is what will prompt readers to keep reading. That being said, know when to let it go, even if it’s earlier than you’d want to if it means not distracting or overly teasing the reader. You want them intrigued, not annoyed.

And just when we’ve been talking about how to pick up the pace of your novel, just as important is slowing down. Moments warranting a slow-down are dramatic events, sudden happenings, and emotional high points that we might want to prolong for their significance and to allow the reader to process them. Strategies for expanding on reader time include adding section breaks, changing point-of-view, and leaving an incident for a chapter before returning to it later.

Then there’s the matter of speeding up. If you want to get things rolling a little faster, avoid coffee-drinking scenes and the like with characters just sitting around and gabbing if it’s not moving the story forward, along with description for its own sake. Establishing atmosphere and such can be better achieved through a few concise, well-selected descriptions than rambling on over every detail of everything appearing in a scene—and remember your R.U.E.: Resist the Urge to Explain! Other areas to cut include naturalistic but unneeded dialogue, bits that aren’t hooks at the beginning and end of scenes, and things necessary to real life but not fiction (think going to the bathroom or getting from one side of the room to the other).

Where making these cuts are concerned, Cohen says:

“If you have a sneaking suspicion something shouldn’t be in there, cut it.”

We new writers hear this advice at every turn. That’s because it’s essential, but it doesn’t have to be painful. Looking on the bright side of cutting things out, we can: 1) accept that we’ve learned something from writing it; and, 2) use it again somehow…perhaps in another story, as a “free read” on your website or blog as a means of drawing readership, or, quite possibly, it might even have to be stuck back in the story it originally came from! Cohen herself had this experience—she’d cut a scene out by her own choice, but when her editor later suggested that that part of the story was lacking a certain something, the bit that she’d cut was exactly the solution!

Finally, I’d mentioned her color-coding system before for determining the appearance and interplay of conflict throughout a manuscript. She likewise closed her session with a similar method for outlining other aspects of plot. Basically, however you’d like to slice and dice it, assign each plot element a color (e.g., interaction between hero and heroine, interaction between hero and his mother, etc.) and jot it on a Post-It note. Then go chapter by chapter and apply the Post-Its to a sheet of paper for each to see your story’s development. This isn’t so much for outlining in advance as it is a post-draft diagnostic tool.

* To see a photo of this strategy and read Cohen’s own description of it, see her blog post, “Post-It Plotting“:
http://www.julie-cohen.com/blog/2010/09/17/post-it-plotting/

What pacing strategies have worked for you? Would you give any of these from Part I or II a go?

Pacing Your Pages – Part I

Whoa there, horsie! Slow-n-steady does NOT always win the race...

Ah yes, welcome back to the Animal Kingdom, where if I’m not a monkey, I’m evidently a horse…let’s just say my husband and I are big fans of the Grand National and cheer the horses on the best way we know how from the pub. Now the Grand National is a looong-lasting steeplechase, so, just as in the London marathon two days ago, the runners have to pace themselves strategically so they have enough energy to race through the climactic finish. But that doesn’t mean they start walking, and, of course, it’s crucial they stay on track. Likewise, the workshop I attended, “Pacing: Or, How To Keep ‘Em Turning Pages,” at the York Festival of Writing instructed on how to keep the pace of your novel moving without meandering off course.

To start, as you can see on the right side of the screen, I’ve just started reading the novel Getting Away With It. I’m doing so for entertainment, yes, but also as a lesson in pacing—it so happens that its author, Julie Cohen, led the above-mentioned workshop, so I thought I’d check ‘er out.

Cohen started out by noting “novel time” and recommended using a blank calendar to map out the story’s timeframe (bearing in mind “reader time,” the timeframe during which the readers actually read it…you want to keep a novel moving, but you also want to work in enough time for your readers to catch their breath). And while a longer novel versus a shorter one can allow more breathing room for character introspection (which are necessary moments), she recommends against over-using it.

As for conflict, Cohen calls us the “Time Lords” over reading time. 🙂 What she means is that reader time is subjective; it’s the writer who manipulates it. And she advocates doing so by including as much conflict as possible in each page, which I’m sure we’ve all heard before:

“A lot of well-handled conflict will go quickly, no matter how many pages.”
– Julie Cohen

She’s not talking car-chase, high-drama conflict at all turns but, rather, varying types of conflict—this could be any of the usual types: Man vs. Man, Man vs. Himself, Man vs. Society, Man vs. Nature. A blend of these conflicts are likely occurring in your novel, and Cohen suggests tracking them via a color-coding system to map out how they coincide chronologically. This can help you visualize the interplay of conflict as well as an approximation of your story’s shape.

Next up is function. A pacey book is efficient in its storytelling. Among the functions its chapters/scenes serve is moving the plot/subplot forward, developing character, creating emotion/atmosphere/conflict, and imparting information. But if you find you have several scenes serving the same function, either condense them or add in additional functions. A good way to determine this is to make a “scene function” list.

Also essential to pacing is starting and ending each scene with a hook, as well as giving your reader variety in mood, topic, theme, and style. To demonstrate the efficacy of this, Cohen had us do a simple exercise with Shakespeare’s Romeo and Juliet (it took a teacher to identify another teacher right off the bat, by the way—her presentation style was straight out of the trenches of keeping teenagers engaged, complete with energy, worksheets, and jigsaw activity. Everyone loved her! :)). Anyway, she’d provided a list of consecutive events from Act 1 Scene 1 to Act 2 Scene 2, and we were to label each with symbols denoting different tones, emotions, characters, and dramatic points of the story. The result is…*drum-roll*…That’s right, variety. You see an interplay of different elements without formulaic repetition.

“Putting your readers on a rollercoaster is going to make them think and feel like they’re going faster.”
– Julie Cohen

So in an attempt to pace myself and allow time to digest the above, I’ll quit here and resume with the rest in Part II. But to practice my lessons, I’ll end on a hook. While I haven’t yet shared the punch-line to my “Why did the monkey fall out of the tree?” joke, I’ll leave you with this one, in keeping with today’s theme:

A horse walks into a bar, and the bartender says…