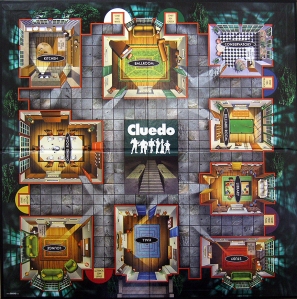 "I suspect: Colonel Mustard, in the Kitchen, with the Candlestick."

On page 38 of Room to Write, Bonni Goldberg describes the kitchen as a “symbolic place” that is “well stocked with associations, memories, and metaphors.  Today, then, we are to write about our kitchens as though we are detectives on the scene, conducting a forensic analysis of sorts as we use visual clues to deduce what may have happened there and how the kitchen reflects who we are.

With trepidation, I approach the kitchen.  Squinting as I scan the grey and black-splotched stone of the countertops, I pan my head to the kitchen island.  I crouch like a jungle cat to bring my eyes level with its flat surface and frown at the otherwise camouflaged crumbs to be spied at this angle; I straighten and peer over the infected area more closely, pressing a fingertip into the crusty debris and raising it to my tongue:  digestive biscuit…dark chocolate…Marks & Spencer.  And do I detect a hint of sesame, poppy, and pumpkin seed cracker?  Hmm…before I can analyze further, my attention is usurped by a darkened stain a mere inches away.  Blood!  No, it’s not red.  Urine!  Ewwww, no, we may leave crumbs, but we’re not that uncivilized (at least I’m not).  Tea!  Yes.  Dripped when pouring yerba mate from my iron Japanese tea pot.  Phew.  Aside from that, a benign burgundy pasta bowl rests on its wrought iron stand, bearing oranges, apples, and bananas (green-turned-yellow ones, only…the second they start to spot and infuse the room with that banana smell, they’re outta here!), standing squatly beside the coin jar and miscellaneous utility bills.

I redirect my focus, then, on the longer, L-shaped countertop comprising the kitchen corner.  A food-stained cookbook (used at long last!  Hurrah, newly discovered inner Domestic Goddess!) reclines on its wrought iron easel next to the paper towels, obscured only by the blue Brita-filter water pitcher that hangs here due to no space in the wee London-sized fridge as well as my aversion to drinking cold water because it hurts my teeth and throat.  Adding to the clutter on this side of the sink are a couple crystal wine goblets with little puddles of deep crimson collected at the bottom.  The sink is suspiciously empty…yet the anal-retentive way in which the hand soap, lotion, washing-up liquid, and sponge are aligned behind it indicates that exposed dirty dishes are not an option in this space.  Turning my head further right, I see a retro-style chrome toaster tucked into the corner, chillin’ with its buddies the french press, tea pot, and all the tall cooking/serving utensils standing to attention atop tiny silver stones inside a clear vase.  Which brings us to the stove…hmm…more crumbs and stains, and a red tea kettle splattered with grease.  This doesn’t happen on my watch; the husband clearly was the last to cook.  Salt, pepper, knife block, and corkscrew are still present and accounted for on the stove’s other side.

But wait a minute.  Something is amiss.  I turn round in circles and rove my line of sight all about the wooden cabinetry that surrounds me.  Where are all the major appliances?!  Thief!  Whodunit?!  Inhaling and exhaling rapidly, my heart thumping against my breastbone, I slowly sink to a squat as the scene starts to flicker like a film reel, and the words Crouching Tenant, Hidden Dishwasher splay across the silver screen.  I extend my hand toward the sleek metal handle protruding horizontally from one of the cabinet doors; held in my clammy grip, it yields with creaking resistance as I draw it down like a drawbridge.  The dishwasher!  A musty, swampy smell wafts out as I pull out the lower drawer:  dishes are segregated into different quadrants by dish, small plate, large plate, and miscellaneous.  It becomes evident I was the last to load the washer, as they would otherwise be arranged haphazardly in such a way that only a third of the dishes would be able to fit, indeed if they made it into here from the sink or countertop at all…I shudder at the thought and return my gaze to the efficient logic that does, thank goodness, reside in front of me, then close the door.

I stand with fists clenched, resolved to find the rest.  In a flurry, I throw open all the cabinet doors to reveal what lays behind, and it’s as though the kitchen is a life-size Advent calendar when the hidden goodies are revealed:  a fridge, a freezer, a washer-dryer—you heard me.  Remember, it’s London.  Why not do laundry in the kitchen?  Why not risk perishing a painful death in flames when the water from the washing cycle drains out and is automatically replaced with searing heat?  Just as I think it, a vibration unbeknownst to me earlier begins to thrum with more aggression, shaking the tile at my feet.  I look to the washer-dryer and notice a spin cycle in play, remembering that what the spouse lacks in dishwasher-loading-strategy (will be commencing his virtual training soon via the Tetris game) is readily compensated for by his penchant for doing laundry.  I become more cognizant than I’d like to be of all the untoned bits hanging off my body as they shake along with the machine.  The humming rises in volume as my breasts and biceps begin to blur, and I dive to the carpeting in the adjoining living room with hands clasping my head as the drum propels our terrified clothing about like a jet engine about to send our flat airborne.

A minute later, all is calm.  Quiet.  I crack an eye open to scan the perimeter before making another move.  Turning myself about, I army-crawl back to the washer and wait for the click to signal I can open the door.  As I do so, hot steam rudely breathes in my face, and my husband’s boxer shorts look to me hopefully as they cling to the edges of the drum and leave my panties to fend for themselves when they peel off and fall to the bottom.  With a pissy sigh, I climb to my knees, then feet.  My inner Domestic Goddess has long since fallen and rolled down Mount Olympus, so she mutters under her breath as she trudges out of the kitchen to retrieve the drying racks and thinks about tending to that damn dirty countertop.  At any rate, case closed.

If anything, this exercise has reminded me I need to clean my kitchen 🙂

I think it would have been interesting to have tried this activity a couple years ago when I was still single and living alone to compare/contrast with how I approached it here.  It seems clear that many of my present kitchen’s connotations relate to my adjustment to cohabitation and those little domestic idiosyncrasies that occur between couples.  The dynamic of the setting is also influenced by virtue of being in a different city and country; there’s a cultural impact on physical features and layout that differs from what I had in the States.

Overall, I enjoy this sort of “investigation” based on visual clues and have used it overtly already in my current manuscript—there’s a scene I included for comic relief in which my protagonist wakes up after a night of heavy wine-drinking and follows the trail of evidence she herself left behind to figure out what she did before passing out.  Based on a true story, of course… 🙂

Primate that dapples in writing when not picking others' fleas or flinging its own poop. END_OF_DOCUMENT_TOKEN_TO_BE_REPLACED
This entry was posted on Saturday, July 24th, 2010 at 13:13 and tagged with Bonni Goldberg, creative writing, Descriptive Language, kitchen, Room to Write, self analysis, Setting, writing blog, writing exercises, writing prompts and posted in Descriptive Language, Setting, Writing Elements, Writing Prompts. You can follow any responses to this entry through the RSS 2.0 feed.
« The Monkey Meltdown
Same Difference »

3 responses to “The Kitchen Culprits”