The Shotgun-Shack Story: Nowhere to Hide 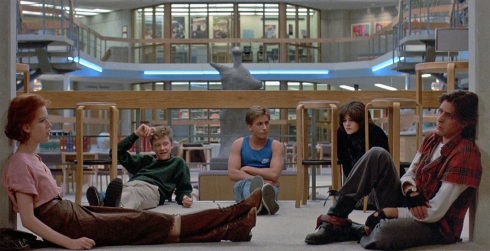 I’ve been sitting on a topic for a while that a recent blog post on Lethal Inheritance  has spurred me to finally write.  In Tahlia’s post, “Is writing the second novel easier than the first?“, she discusses how she has started writing her second book while her first manuscript awaits publishing.  She mentions ways in which this second story line differs from the first:

“[I]t takes place almost entirely in one set of adjoining suites in a castle, whereas Lethal Inheritance’s scenery is always changing. Thirdly, it’s character, relationship and emotion driven, rather than action driven. For me, that’s a harder brief, and that’s why I’m not sure at this stage if I can make it work.”

To which I responded:

“What I’ve been working on to date falls in that [same] category; there are not dramatic changes in setting or adrenaline-rushing action as it’s very concentrated on the psychological/emotional variations in my protagonist as she questions identity and her perceptions of reality.”

I proceeded to say that, though this is the type of story I’m personally drawn to, I realize it doesn’t necessarily have the mass-market appeal that would get it snatched up for publication.  And that’s okay—I am definitely writing the story I want to write; I started rereading it from the beginning yesterday and am all the more convinced of that.

So, today I’m dedicating this post to those incredible stories out there that capture our attention without catering to the modern-day ADD bred by MTV-esque rapid editing and car chases and explosions.  I’m not saying I’m not likewise entertained by the action-packed tales, just that they are not the only ones capable of, in fact, entertaining.

I attended a writing seminar last year in which a panel of agents, publishers, and authors spoke on the craft of writing in conjunction with getting published.  Someone in the audience had asked about commercial versus literary fiction, and an author responded that “commercial” fiction is story-driven whereas “literary” fiction prioritizes language and ideas—it is read for the beauty of the words and provocation of thought.  She attested that many authors try to combine both.

This got me thinking, then, about the more character-driven stories that I enjoy.  Where films go, I noticed a trend in my collection of one-setting movies; indeed, some partake in just one room.  Think about that!  One room.  If a film or novel can captivate you all the way through by virtue of situation and dialogue without having to change settings, that is a brilliantly written manuscript, in my opinion.

Don’t believe me?  Try watching Rear Window, 12 Angry Men, Rope, or, hey, even The Breakfast Club—all of which take place in a single room (with the exception of maybe a minute or two outside)—and tell me that you aren’t entertained.  These are carried by characterization and dialogue, just like other favorites of mine:  Before Sunrise and its sequel Before Sunset (which both admittedly change settings, but the respective cities of Vienna and Paris are just backdrops to the characters’ ongoing conversation), The Anniversary Party (an ensemble cast in a Hollywood couple’s home), and Gosford Park (in the vein of the Agatha Christie books I loved as a kid that transpire in a single setting—a mansion in And Then There Were None and a train in Murder on the Orient Express).  And it doesn’t take dramatic, in-your-face action and cutting from setting to setting to get the blood rushing, as not only evidenced by these mysteries and the two aforementioned Hitchcock films (Rear Window and Rope), but in haunting thrillers like Dead Calm and The Others as well…which coincidentally both star Nicole Kidman, the first taking place on a sailboat and the second in yet another old English mansion. 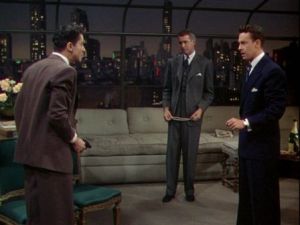 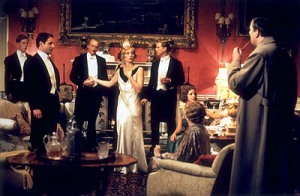 In speaking on setting, the visual examples of this most readily come to my mind through film, but the success in capturing even a viewer’s attention in this case comes down to the writing.  The writer scripts the dialogue and envisions the setting and behavior of the characters—in film, the director then works to capture this audiovisually.  Yet in a novel, it is all on the writer to convey these elements entirely in words.

Stripping away the attractive actors, elaborate sets, and soundtracks does not render mere words dull, nor is a single/minimal-setting book a bore.  If that were the case, where would that leave the classic works of authors like Austen or Bronte, whose stories don’t deviate far from the character’s homes.  Think of the chill sent down the spine by novellas like Henry James’s The Turn of the Screw or Poe’s The Fall of the House of Usher (houses), the adrenaline and fury aboard Hemingway’s The Old Man and the Sea (boat), or the intimate existential conversation in Salinger’s Franny & Zoe (the entire second part moves only from the bathroom to the living room) or Boethius’s 6th-century The Consolation of Philosophy (a prisoner speaks with Fortune in his cell).

What is it about the single-setting that so fascinates me?  I suppose it’s in part the appreciation I feel for the effectiveness of story-telling that doesn’t rely on bells and whistles.  And it’s the great experiment of what happens when you isolate people in a room—throw in a dash of tension, stir, and bring to a boil.  It becomes a study of humanity when characters aren’t able to escape each other or even themselves:

There is much heart, soul-seeking, and thrill to be had within four walls.  A writer can most certainly pull it off, though the impact can only be as strong as the writing itself in bringing it from the corners of a room to the corners of the mind.

How about you, readers and writers—do you gravitate toward the story-driven or character-driven?  What are some examples that successfully combine both?

Primate that dapples in writing when not picking others' fleas or flinging its own poop. END_OF_DOCUMENT_TOKEN_TO_BE_REPLACED
This entry was posted on Saturday, August 21st, 2010 at 16:25 and tagged with character description, character dialogue, commercial fiction, creative writing blog, literary fiction, publishing, shifting scenes, story setting, writing a novel, writing blog, writing fiction, writing guidance and posted in Character, Conflict, Descriptive Language, Dialogue, Essay, Figurative Language, Musings on Writing, Novel, Setting, Short Story. You can follow any responses to this entry through the RSS 2.0 feed.
« The Fear Factor
What Happens in a Meadow at Dusk? »

23 responses to “The Shotgun-Shack Story: Nowhere to Hide”