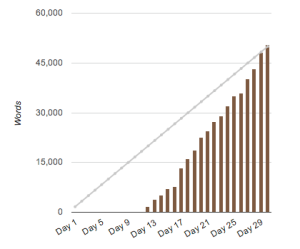 Just over a month of recovery has transpired since my NaNoWriMo burnout. Like a Roman candle, the concentrated spew of writing was glorious, dazzling my eyes with a populated computer screen after a long stretch of spark-less procrastination. And then November ended and fffffzzztt. So did the writing. For the most part. Just like legs need a rest after a marathon, I needed to retrieve my eyeballs and fingers from where they’d fallen off onto the keyboard and step away from that project for a bit.

In the meantime, I’ve been tweaking my first manuscript and rewriting query letters over and over again to get ready for a much-delayed round of submission. I also headed Stateside for another two weeks for Christmas, which was crazy-busy but magical, just like the Disney trip before that. 🙂 Anyway, I’d promised to follow up on my NaNoWriMo experience, so let’s get on with it.

Writing 50,000 words in one month is a concept that makes folks wary, and understandably—for years I assumed it could only generate pure and utter crap; good writing is not to be rushed. But now having gone through it, there’s no question it was a useful exercise that I highly recommend, and here are some reasons why:

1. NaNoWriMo was like a writing enema. I’d been stopped up for a while in that respect, sitting on a story outline I’d completed in spring only to sputter out one chapter in summer and jack until November. It was shit-or-get-off-the-pot time, and NaNoWriMo was precisely the initiative I needed. So, to run with my disgusting metaphor, even if a lot of my massive brain-dump was crap, it was purifying to get it out of me. I did have an outline to keep me focused, but I think if you’re still in novel-brainstorming mode, it’s a perfect way to write your way into a storyline to run with beyond NaNoWriMo.

2. NaNoWriMo gave me discipline. For as much as I’ve preached on this blog that writing is a discipline, I still tend to fall in with the “I write when I feel like it” crowd. It’s incredibly difficult for me to establish routine in my writing, so having that NaNoWriMo goal was such a motivating force. Not only did my profile stats continually calculate how many words I had to average per day based on my actual pace, but punching in my new word counts and watching those bars climb on the chart was immensely satisfying. It pushed me each day to stick to a daily word goal and punch out a few more sentences just when I thought I had no words left in me. Contrary to such doubt, there’s always more waiting in the folds of our grey matter.

3. NaNoWriMo pushed me out of my comfort zone. There’s obviously no hard-and-fast “right” way to write. Some writers vomit out their stories first and revise later, and others revise as they write. I trend toward the latter category. It has merit, but I found it worthwhile to try a new approach, and the result broke some bad habits I’d naturally fallen into. One of the major flaws of my first manuscript was that its early drafts were overwritten. I pored way too much over every word and sentence and stopped writing new material in favor of revising finished chapters to death first. The writing needed to relax, and, what’s more, I hadn’t mapped out that entire story yet. To so painstakingly revise early chapters when I still had no idea where the later chapters were going was just stupid. It was only when I’d finished drafting the entire story that I realized what needed to change at the beginning to improve consistency. So, not only did I outline my second manuscript beforehand this time around, but NaNoWriMo forced me to keep driving this story forward and not complicate phrasing through over-thinking it—there simply wasn’t the time to. It’s not as though I had no opportunity for some thoughtful wordsmithing, logically thinking through plotting, or researching to enrich descriptive detail and authenticity. I simply mean that, overall, I had to write more off-the-cuff and to-the-point than I’m used to, a risk my writing in particular really needed to take.

4. NaNoWriMo powerfully immersed me in my storyworld. Curling up with a single story for so many hours of the day every day was the deepest sea-diving into my imagination I’d ever done. I was truly married to my characters, setting, and situations at that point; the level of commitment was tremendous when I promised to come back to them every day, and the short gaps between bouts of writing ensured I never really loved ’em and left ’em. It’s essential to at some point step away from a story and come back to it with fresher eyes (as I’m doing right now), but the benefits of sticking with it for better or worse in November included seeing my storyworld more vividly and improving its continuity—I remembered details more clearly and strung them together more efficiently since they were written only a matter of hours/days apart from each other.

5. NaNoWriMo was P90X for my brain. In view of all the aforementioned, my mind clearly got warmed up and broke a sweat trying to keep pace with my required daily average word count (~2,700/day thanks to my late start). The mind is a muscle, after all, and it needs to be flexed in order to grow. Pushing yourself to go as far as you can one day will strengthen you to do the same if not more the next. And haven’t you found that the more you exercise, the more you want to? In the same way, NaNoWriMo energized me to the point where I wasn’t writing because I had to. I wanted to. I honestly woke up every morning excited to get back to my computer to research and write.

Granted, there’s no way I could’ve sustained the intensity of NaNoWriMo beyond that month, but I do think the lessons it taught can be applied in realistic doses going forward on my project. I went into it with 10,000 words, came out with 60,000, and estimate I have about 15,000-20,000 more words to go until my first draft is finished. There’s no question I’ll have to revise the hell out of it, but I definitely don’t discount the earnest progress I initially made on it in a very, very concentrated amount of time—I think (*hope*) going into NaNoWriMo with an advance, focused vision of my story optimized how many of those 50,000 words actually have a shot at remaining in the final draft…the major ideas at the very least.  I tried my best to work smarter, not harder, so we’ll see one day what I have to show for it. 🙂

Twelve days into November, I made the idiotic decision to first join NaNoWriMo, and ever since, my desk has been a feces-flingin’ factory of writing. Victory seemed improbable but is oh-so sweet for this now official NaNoWriMo-Fo. Reflections on the experience are forthcoming, but for now I really need to take a shower… 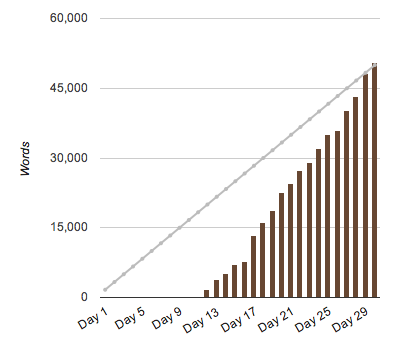 Digging a Rut into a Wishing Well

Meh.  I’m starting to sink into the funk I babbled about previously in “My Inner Critical Beeyotch.”  The dealio is that I’ve approached the point in my project where I really need to start bringing everything to climax and a concise resolution; the mental obstacle that I’m encountering now is not a writing block, but, rather, a plotting block.  In fact, my problem is the opposite of writer’s block, as ideas and words are flowing really naturally now, but I think what’s working against me is that, as far as the books I like to read, I gravitate to the lengthier novels that I lose myself in for a nice chunk of time, the ones with gradual character and plot development, that steep you into some of the minutiae to help you feel more intimate with the characters, like you’re really accompanying them through a personal journey.  I’ve been consequently following a pace that feels natural and necessary to me, knowing full well the word count still wouldn’t come close to some of those beasts I have on my bookshelf.  Unfortunately, the tidbit of advice that keeps coming to my attention through various sources is that word length for first-time authors should not exceed 90,000-100,000 words.  Um, well…I’m already in that vicinity and feel like I have a ways to go.

Here’s what I’m struggling with:  I started this project as something for me, a creative outlet I’ve been wanting to plug into for years and am only first now seizing the opportunity.  At the outset, I told myself it was first and foremost for me, but if I finished it and was pleased enough, it wouldn’t hurt to try to make something more of it by submitting it to agents in pursuit of that pipe dream of getting published.  Why just let it sit there on the computer, right?  But that said, I don’t want to be overly inhibited by keeping my eye on the publishing prize. I want to create, not sell out, but I also want to be realistic.

All right, then.  Chill, Monkey, and focus on the next writing prompt.

Page 21 of Room to Write asks us to record our wishes.  As Goldberg says:

“Wishes are voices of the imagination, taking you out of the realm of reality on a daily basis.  For this reason, in creative writing, it is worth paying attention to them.”

We can write our secret wishes, our past or long-time favorites, or the one that is nudging us this very minute.  I will follow this last one, for obvious reasons.

Today I wish for clarity of mind…that I can sift and sort and structure my swarming ideas into a manageable plot to continue writing…that I will hold fast to my original goals surrounding theme and mood…and that my instinct will guide me through my pacing and revision.  I wish that the end product will be something I am utterly proud of and content to share with those closest to me, with the added bonus of being something marketable, so that I may also share my story with the world. I wish for the patience, inspiration, and discipline to see me through toward this end in the meantime.

Ah, it’s nice to let that out.  No shame in wishing.  What do YOU wish for?